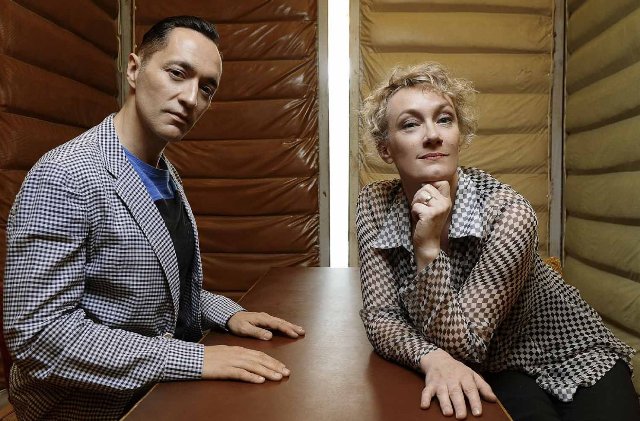 Bookended by a stately ‘Mack the Knife’ and philosophical ‘Great Big Sky’ this “reimagination” largely consisting of Kurt Weill songs was recorded in Oslo in the summer of 2014 the wheels set in motion by the Dessau Weill Festival the previous year.

Although Hülsmann and Bleckmann have known each other since the 1990s this is their first album together and the pairing is highly effective, the New York-based singer known for his excellent interpretation of the songs of Kate Bush authoritative in a Kurt Elling kind of way. Arthurs’ role is by turn subdued and affectingly consoling on ‘River Chanty,’ mournfully muted at the beginning of the title track Hülsmann tracking his progress fastidiously before Bleckmann sings Walt Whitman’s words to her own reserved but compelling composition. The lyrics are printed in the album booklet, a useful touch and appropriate as this is an album with such a strong literary sensibility: you want to savour every word.

In terms of band performance, particularly where they can find more room for elaboration, ‘A Noiseless Patient Spider’ is where the album gets interesting, Whitman‘s ‘Beat! Beat! Drums!’ with its edgy bass and whinnying trumpet, displaying another side entirely of what they can do as an improvising unit.

An album that takes its time for its pleasures to unfold and inure themselves it’s left to ‘Great Big Sky’ using the delightful poetry of Langston Hughes on Weill’s tune to provide welcome zest and the icing on the cake. Stephen Graham

Released in the UK/Ireland on 9 March