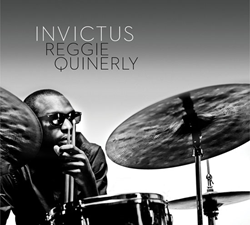 Three years on from his debut the album’s title borrows from a nineteenth century poem by Englishman William Ernest Henley.

The Houston-born player – a former classmate of Robert Glasper’s at the city’s High School for Performing and Visual Arts and holder of an MA in jazz studies from Julliard  – is joined by leading vibist Warren Wolf; Christian McBride trio pianist Christian Sands; Monty Alexander guitarist Yotam Silberstein; and another Houston Performing and Visual Arts alumnus bassist Alan Hampton who has produced the album alongside the drummer and who completes this acoustic quintet.

Comprised mostly of well-judged originals – the standard slipped in is ‘My Blue Heaven’ first recorded by Paul Whiteman in the 1920s – Invictus opens with ‘Tavares,’ dedicated to Horace Silver who died only a few months before this album was recorded in Brooklyn. Highly cultured and nuanced (Quinerly’s style reminds me of Clarence Penn a little), although maybe a touch too samey overall, there’s plenty of style, musicianship, and substance here: Quinerly a name we’ll be hearing a lot more of in the future with any luck. SG