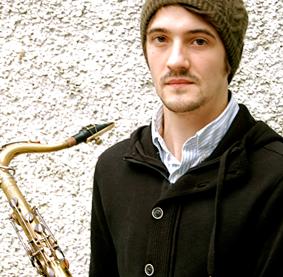 So does Can of Worms, with its Roy Lichtenstein-like Pop Art cover, match its visual impact musically?

It’s the latest album from emerging artist George Crowley here combining as part of a two tenor saxophone front line with Tom Challenger ably supported by the lively rhythm section of Strobes pianist Dan Nicholls, bassist Sam Lasserson and drummer Jon Scott. Seven tunes in total all written by Crowley recorded at London’s Fish Factory Studios in July 2014, this is an metrically-elaborate post-bop affair from the former Cambridge university English Literature student who later took a masters in jazz at the Royal Academy of Music and became part of the London jazz scene debuting with Paper Universe in 2012.

Can of Worms verges on the avant-garde but never quite commits in its modernity instead inhabiting a no-man’s land embedded somewhere edgy deep behind maths-jazz lines. And there’s a clear sense of adventurous interplay within the group, the two tenors aiding and abetting each other, jostling and cajoling, bouncing ideas, taking risks, all egged on by the all-hearing Nicholls. And while the album is serious-minded the musical direction manages to avoid being overly earnest and certainly is not sentimental or backward-looking at all, which is to the band’s great credit. Yet Crowley does not entirely eschew freewheeling swing, and on ‘I'm Not Here To Reinvent the Wheel’ romps away – his sound when you can pick it out maybe closest to Stan Sulzmann’s perhaps – the band capable of generating plenty of heat and clear-headed enough to make logical switches in tempo and mood to take the melody ‘out’ given half the chance. An album that makes you want to hear the band live – their sheer impact never in doubt although somehow we still haven't heard the best of what Crowley, above, has to offer. Stephen Graham