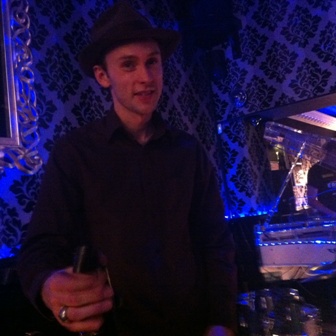 Like Interlude, David Lyttle’s previous album, Faces does not live inside a jazz bubble.

Instead it’s a clever distillation of a number of complementary styles that range from jazz across into hip-hop and soul, making musical connections as it goes along.

The drummer-composer-bandleader’s most high profile and radio-friendly release to date Lyttle joined by a big cast including guests Blue Note label saxophone legend Joe Lovano, hip-hop star Talib Kweli, the vaudevillian pop star Duke Special, and jazz singer Cleveland Watkiss who gigged earlier in the year with Lyttle at Bennigans bar in Derry, and who features on the catchy title track name-checking organist John Leighton’s very special venue. This track plus ‘Houdini,’ featuring singer Duke Special, and the track with Lovano, ‘Lullaby for the Lost,’ would be my pick here, all different and excellent in their own ways, ‘Houdini’ the most significant achievement of an album in terms of a song as a song beyond genre.

An album that sounds that bit more crafted and mature than the likeable but fluffier Interlude this new one is also a clever production job recorded in a bunch of studios in the US and closer to home yet not sounding at all over-produced or contrived. Faces also includes spots by rappers Homecut and iLLspokinN, Talib Kweli injecting some sunny energy on the Crescent City-inspired track ‘The Second Line’ the best of the hip-hop inclined material. Bassist Keith Duffy of The Corrs is an anchor throughout and the album is partly a family affair too with Lyttle’s vocalist sister Rhea and singer mother Anne also playing prominent roles.

Lyttle fundamentally has great chops and ears and knows how to groove: at his jazziest his main strength coming out of the Blakey tradition via the Keith Copeland sound and crucially at his funkiest strutting like he’s dreaming he’s Zigaboo Modeliste or baking beats Questlove-like on the hip-hop side. An album that spreads its net wide but manages nonetheless to pull in a good catch.