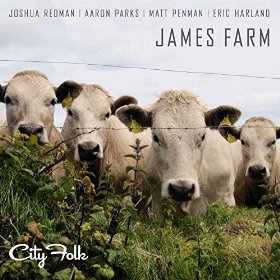 This four-piece have the knack of sounding like an indie band without sacrificing their jazz content. Close-knit with a superb debut behind them already released three years ago all of the players, sax star Joshua Redman, pianist Aaron Parks, sounding remarkably like Brad Mehldau on catchy opener ‘Two Steps’, bassist Matt Penman who crops up on the new Olivia Trummer album Fly Now, and Charles Lloyd drummer Eric Harland all contribute tunes, and their individual approaches to composition does allow for a certain shifting around not that the quality varies too much and tunes flow into a group sound.

Redman is more bittersweet than usual and really quite lonesome on ‘City Folk’ the title track, he’s like the hero in a romcom, Parks more accessible certainly than on his own brilliantly avant solo album Arborescence, while Penman beefs up his riffs to breaking point. Harland usually heard in freer situations with Charles Lloyd is able to relax a bit in the more conventional material but still finds that edge the material needs. Structurally the tunes are very strong, only faltering when they become a little too introspective, for instance on ‘Jury’s Out’, or just too nice, identifiably “songs” the four improvising on strong scraps of melody. Parks’ tunes are the ones that work for me best here, and there are ‘Unknown’, ‘Farms’, Redman really letting himself go on a tearjerker of a solo, and ‘Otherwise’. SG