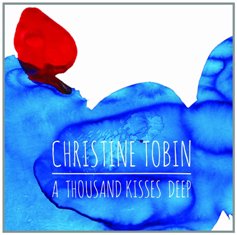 The songs of Leonard Cohen have long featured in the live repertoire of jazz singer Christine Tobin who now documents her affinity with Cohen in its most comprehensive form to date with this her latest album released a matter of months ahead of the great Canadian singer-songwriter’s 80th birthday this autumn.

In terms of Tobin’s work this new album follows on from the Irish singer’s acclaimed WB Yeats-themed album Sailing to Byzantium in 2012, and with other projects including a Carole King theme an important aspect of the singer's repertoire in recent years it’s clear that Tobin has now reached a stage in her career where songbook material from disparate sources rooted in popular music as well as poetry aid to clarify her essential distinctiveness as a singer by embracing relatively familiar material rather than concentrating on her own songs.

There are 11 songs of Cohen’s here, mostly very familiar, and some go back as far as the 1960s but also take in Cohen’s most recent work. Tobin has arranged some of the selections and she’s accompanied by Phil Robson on guitar who is also responsible for several of the arrangements, and as well there’s Huw Warren on accordion, Dave Whitford, double bass, and Adriano Adewale percussion, with both pianist Gwilym Simcock and trumpeter Nick Smart guesting. Simcock also steps in to arrange ‘Anthem’, the track he guests on.

The album begins jauntily with ‘Famous Blue Raincoat’ Warren’s brief accordion solo not far in pulls the song in a different direction with Adewale adding some percussive edge. Robson’s sunny accompaniment on ‘Hey That’s No Way To Say Goodbye’ is beautifully captured and Tobin draws out the tenderness in the gently legato treatment of the song in her vocal, one of the best of the love songs covered here.

There’s a chatty flavour to ‘Tower of Song’ with a nod to Miles Davis and Joe Zawinul thrown in, one of the more imaginative treatments here. Tobin manages to avoid the more lugubrious side of Cohen’s doomier moods say on ‘Take This Waltz’ by stamping her own interpretation strongly on the song and some of the choices of key signature on the album and the great range of musical settings mean A Thousand Kisses Deep has a great deal of unexpected variety and sits far from representing a straight covers album, even when there is a great and obvious respect for the lyrics, with Tobin’s diction and care in interpreting the nuances of the words paramount.

Adewale’s percussion opens ‘Suzanne’ with some springy bass from Whitford quickly coming on and then African-type guitar from Robson, which is an unusual way in to one of Cohen’s best known songs in this surprisingly upbeat version. Tobin manages to draw out the joyousness of the song to great effect. Simcock provides a delicate opening to ‘Anthem’ where the mood of the album definitely darkens, an inevitability for anyone singing Cohen and Tobin’s vocal here has a lustre and poise that is very involving. “Ring the bells that still can ring/ Forget your perfect offering/ There is a crack in everything/ That’s how the light gets in,” Tobin sings movingly here, and the song and her interpretation is a huge highlight of the album.

The title track comes quite late in the day and you feel you’re reaching the very heart of the examination of Cohen’s work by this point, where Tobin really shows her control and luxuriates in the great possibilities the music provides her and the band. Robson takes a great solo after the first verse and there is a strong jazz sensibility in many places without it being forced down your throat. Live, Tobin has long sought strength in her interpretation of ‘Everybody Knows’ and it’s a convincing element of this album too, which is completed by the hugely rhythmic ‘Story of Isaac’ and ‘Dance Me To the End of Love’ featuring a bravura trumpet solo at the beginning from Nick Smart and where we find Tobin animated and especially expressive.  A fine album that continues Tobin’s wonderful run of form in recent years.
Stephen Graham