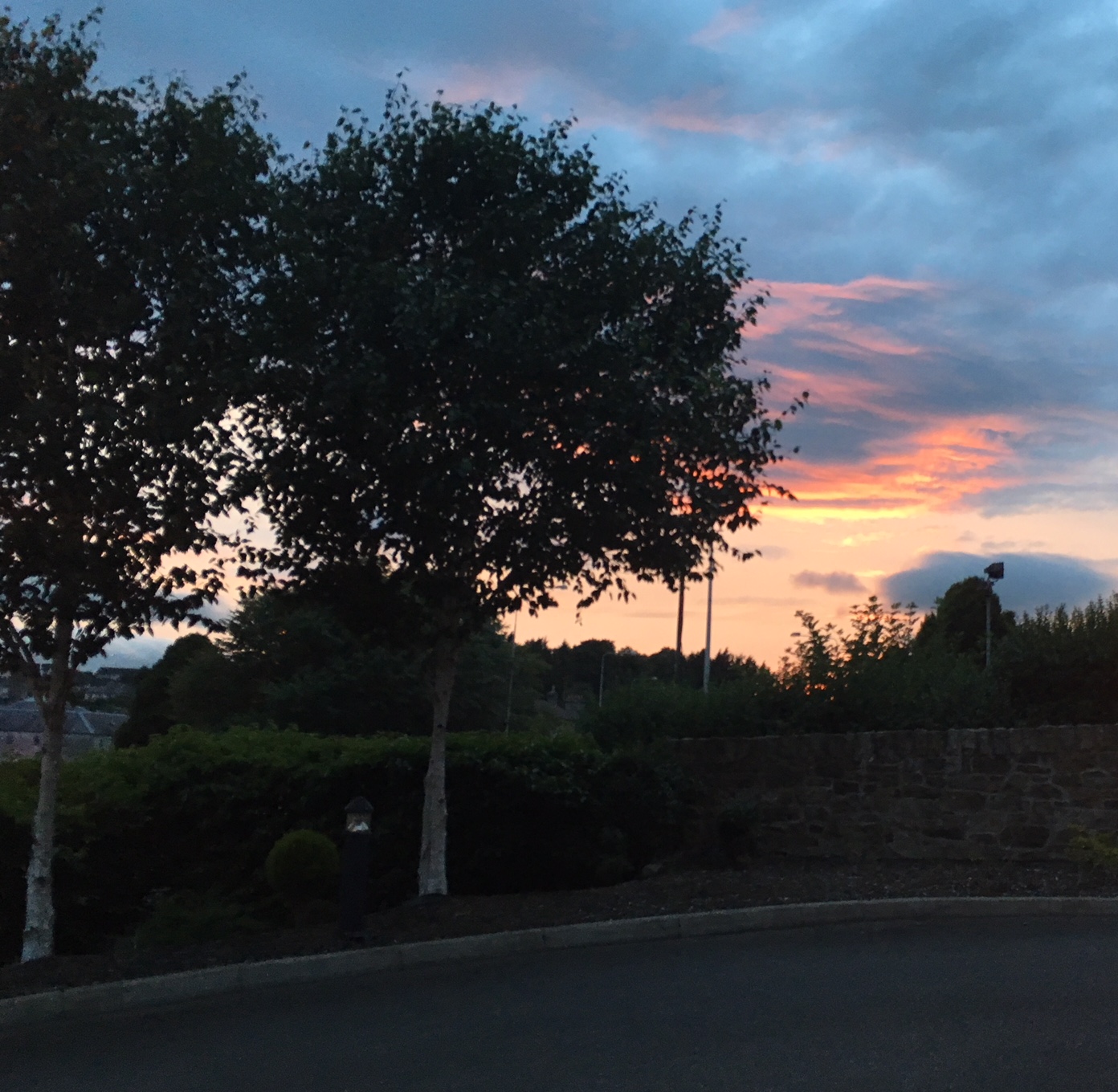 Waiting for the first Fizzle at Happy Days, the Beckett festival, a man and a woman entered Charlie’s pub on Church Street. The tall well dressed man stood by the bar and looked somehow familiar although his was a new face to me.

I thought for a moment, could it be...? My hunch turned out to be right and I haltingly said hello to the nephew of Samuel Beckett.

Edward Beckett — the playwright's executor and custodian of a great literary body of work famed the world over — looked for the bartender who keeps some of the best stout in Enniskillen to approach.

There is a certain likeness to the famous face of Sam Beckett, inescapable thanks to Happy Days in what ahead of the completion of the Godot tree expected in a few weeks has turned out to be a vintage year.

Placing Beckett in context in the theatre and out there into the natural beauty of Fermanagh and melting all sorts of artistic borders in the process given that he went to school at Portora in the town is what Happy Days is all about.

That face again, the Jane Bown photograph of Beckett, part of the street furniture whether in shuttered spray paint added Potemkin style when in a general sprucing up for the G8 world leaders coming to the Lough Erne resort kept the town's painters and decorators busy or on the walls of pubs and cafes is part of the cultural fabric of the town.

Edward said that he was looking forward to seeing “Adrian in Fizzles later”, Adrian being the actor Adrian Dunbar (Superintendent Ted Hastings in BBC TV police corruption drama Line of Duty), and said that he was in Happy Days for pleasure mentioning that while other members of his family had attended Portora he had gone to school back home in Dublin at St Columba's.

I did not wish to waste his time and he ordered his drinks and returned to his booth.

Then famed Beckettian actor Barry McGovern joined him soon after. He had just finished that evening's performance in The Old Tune at Ardhowen after playing the Strule in Omagh two nights earlier.

I had chatted to him serendipitously on a bus meeting him for the first time the previous evening returning to the castle car park on the island of the town from the secret location of What Where, which turned out to be a large agricultural shed near the walled garden on the Colebrooke estate of Lord Brookeborough, the location for What Where, Beckett's last and little performed play.

Technical issues had dogged that night's performance but hardly spoiled it for those without a detailed prior ''head memory'' knowledge of the text, although the persistent Beep became a fifth character joining Bam, Bom, Bim, and Bem. Quizzed by me Barry said this new character was ''Not in the script''. As the bus trundled through the estate, driver Leslie earned applause when the lumbering coach managed to negotiate a close squeeze below maximum headroom. Stuff happens in the theatre all the time, and the Kabosh director did well nonetheless to keep on keeping on.

Later there, in the audience just before the ever mysterious dusk for a Fizzle in the beautiful Crypt of St Michael's church reached via entering a gate to the right of the front door, in front of us actors Adrian Dunbar, Anna Nygh, and Ciarán McMenamin read sharing portions of texts from Fizzles standing in turn at the altar table, the words a tumble of shadows, an entering and re-entering of the imagination part of the spell. This was prose as beautiful poetry of a kind that hangs there in the air. The form did not matter at all. There is always poetry in Beckett somehow whatever the genre style he chooses, one of his greatest achievements. 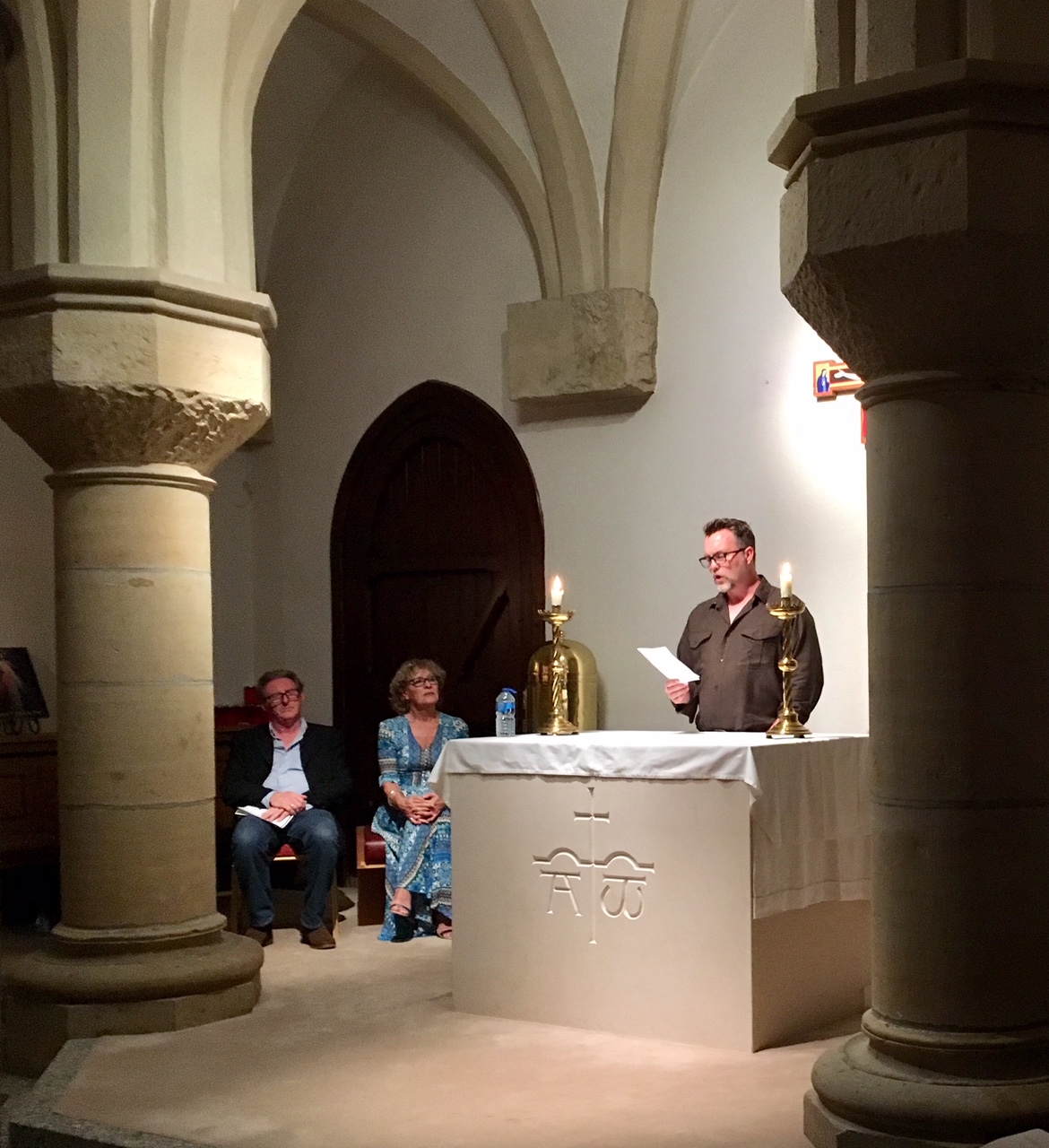 Adrian Dunbar, Anna Nygh, and Ciarán McMenamin read from Fizzles as a trio on the first two nights; Dunbar and his wife Anna Nygh (who was Mrs Huxtable in the acclaimed 1990s TV series Between the Lines) by themselves on the last night

The three actors especially on the first night showed how fresh and relevant the little known work compared to say Godot is in their readings.

David Copperfield actor McMenamin (and author of local Chippie Street phantasmagoria Skintown which garnered some great reviews and has sold well) added another, third, authority, the actors a vessel for the work the words pouring out.

Enveloped by darkness, dusk just a touch away, over the water at the last Fizzles you could hear floating over the river Erne from the Shoreline stage the strains of local country hero Nathan Carter, who has added a new Enniskillen song to the repertory with 'Island Town'.

Fizzles, from 1977 is a hopeful work fundamentally albeit cloaked in despair and Beckett is not kidding any of us or significantly himself via any type of sentimentality which is one of his unique strengths.

Adrian explained in his opening chats to the audience each night that he felt very close to St Michael's church as he has discovered via becoming the subject of Who Do You Think You Are? the popular genealogy series that his grandfather, who was a regimental sergeant major in ''the Skins'' as he referred to the Inniskillings by their usual nickname, was baptised in the church the year mass was first said there. Stephen Graham

At dusk in the Crypt of St. Michael’s church, Enniskillen, top. Last words, from Beckett taken glimpsed driving along the road from Sligo, within Séan Doran's 'Three (or more) Billboards Outside Enniskillen & Sligo' on the Sligo Road between Letterbreen and Enniskillen. From Neither, they are, in a stark stillness of candour, ''unspeakable home.'' photo: marlbank