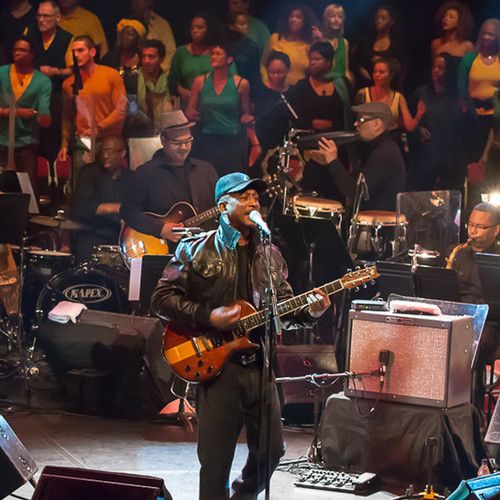 Moved to the bigger Royal Festival Hall for this show on Saturday night, last autumn’s QEH show next door squeezed more than 110 people on to the stage as Jazz Jamaica All Stars, Urban Soul Orchestra and Voicelab with special guest Brinsley Forde celebrated 50 years of Jamaican independence in some style with a themed concert based on Bob Marley and the Wailers’ 1973 classic album Catch a Fire.

The bigger venue reflects the demand for Jazz Jamaica and this is an event, as few bands with jazz roots based in the UK these days play the historic hall any more.

Forde, above at the mic, who with ASWAD had significant chart success with songs such as ‘Don’t Turn Around’ going to number one in the charts in 1988, and ‘Shine’, was the front man of the QEH gig and returns once more. The band also toured at the time. He stood there, relaxed looking, wearing a leather jacket and sporting a baseball cap with a guitar loosely slung over his shoulder.

Behind him to his right were the Urban Soul Orchestra an eight piece strings section led by violinist Stephen Hussey, while immediately behind Forde at the back of the stage Jazz Jamaica’s bandleader Gary Crosby OBE was beefing up his double bass reggae style to suit the occasion. The bass lines were extra fat, extra juicy, the reggae beat of guitarist Robin Banerjee and propulsive drums of Rod Youngs lovingly honed, and percussionist Pete Eckford was clearly raring to go from the start, fine and choppy on congas.

Not all the songs performed were from Catch a Fire but they formed the main strand of the musical programme, including album opener ‘Concrete Jungle’, ‘Slave Driver’, ‘400 Years’, ‘Stop That Train’, ‘Baby We’ve Got a Date’, and ‘Stir It up’, the latter opening the second set with a great string arrangement involving the fiddling duo of violinist Miles Brett and Stephen Hussey. ‘Kinky Reggae’, and the formidable ‘No More Trouble’ were also performed from Catch a Fire (only ‘Midnight Ravers’ was absent), and other Marley classics featured included ‘Redemption Song’ and ‘One Love’ from Exodus for good measure.

Forde was uniformly excellent that night, with great stage presence and a mellifluously persuasive voice, particularly on ‘Stop That Train’, ‘400 Years’ and ‘Redemption Song’, and the South Bank Centre choir Voice Lab directed by Mark De-Lisser went down a storm in the second set with their spirited sense of involvement. The audience got on to their feet and it all felt so natural. Earlier the vocal torch was carried under their own pared down auspices by the All Stars’ backing singers who Crosby dubbed “them three”, Jazz Jamaica’s own I-Threes: MOBO-nominated Zara McFarlane, Valerie Etienne and Rasiyah Jubari, whose harmonies and occasional ensemble-stealing moments were just great. Musical director and conductor Kevin Robinson’s trumpet solo at the end was also a classy touch. Hear this very fine presentation at the supersized Festival Hall a space where you’ll lively up yourself for sure. Stephen Graham
Tickets www.southbankcentre.co.uk