It’s the Holdsworthian wail of Montague that throws down the gauntlet first after the tinkling atmospherics on opener the title track ‘Southern Drawl’ Simmons blasting away in response.

All Simmons’ own tunes, the album was recorded by Ben Lamdin at London studio Fish Factory in February last year. Inspired by the likes of Tim Berne, Jim Black and Craig Taborn ‘Big Wheeze’ moves Southern Drawl momentarily into a Dave Douglas-like space that simmers threateningly, Simmons and Montague doubling on a catchily circuitous line before all three players power up.

‘Scribbles’ shows Simmons knows how to tackle a free ballad, a tune that’s very abstract in its sensibility but tender too and it’s extraordinary in the last few years just how the Cornish native has been able to artistically juggle different approaches to contemporary jazz from his noir-ish dreamtronica band Eyes of a Blue Dog through the chamber sensibility of Fringe Magnetic to this more free-prog domain. 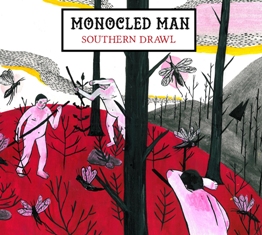 ‘Pud Pud’, the next tune has more of an anarchic sense to it Montague applying textural glue that is prised apart stickily on ‘Royalty’ where the trio manage to smash a tune out of blustery statements and sheer willpower. ‘Van Vliet’ (a nod in the title to Beefheart, you can't help but think), has a Stańko-like calm to it and again Simmons can do that nihilistic lonesome style Montague is able to respond to by comping as if he’s detuning in real time.

Scott’s flourishes on ‘Blip’, then the aching ‘Royalty Reprise’, and jaggedly exuberant ‘Bullet Noise’ complete an album that is a serious listen, further evidence that Simmons can be counted as one of the most creative trumpeters on the UK jazz scene at the moment with ideas to burn firing us all up. 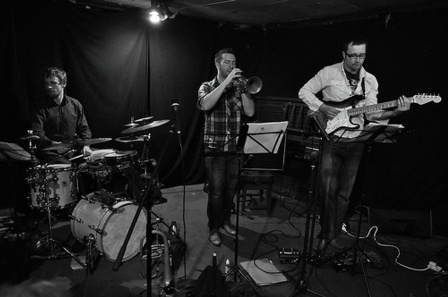 Tour dates in April are Dempsey's Cardiff (15 April); The Forge, London (22 April) in a double bill with the Tori Freestone trio; and Amersham Arms, London (29 April).

Southern Drawl is released on 28 April