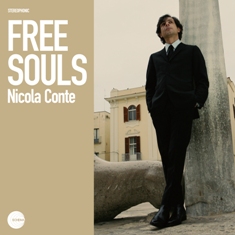 Late to this particular party it was only Rituals that first registered on my radar, Italian guitarist/DJ/producer Nicola Conte’s sassy 2008 album that featured a then on-the-rise José James the same year The Dreamer came out. James is here among a bunch of singers performing in his case ‘Goddess of the Sea’ Conte’s own song but he can’t rest on his laurels when Marvin Parks is around particularly on ‘If I Should Lose You’ done as a fast samba with a fine solo from Italian alto-sax great Rosario Giuliani. But it’s former BritSchool student Bridgette Amofah, currently making waves in the States with drum’n’bass-dubstep hitmakers Rudimental, who steals the show with her laidback sound on the sun-drenched title track and a cover of Bobbie Gentry’s ‘Ode to Billie Joe’ the picks. Conte’s combo here has 60s retro Blue Note-type horns from Magnus Lindgren and Francesco Lento among the horn section (the drummer on seven of the tracks is Five Corners Quintet’s very own Buhainia Teppo “Teddy Rok” Mäkynen). Starry guests include Greg Osby on Ahmad Jamal’s ‘Ahmad’s Blues’ a song that US/Haitian singer Melanie Charles (known for her backing vocals with Laura Izibor and her septet The Journey) almost makes her own. She’s definitely “so urban her suburban friends don’t know her bag of blues” to borrow from the song. So, tasteful sophisticated clubby soul-jazz for sure, perhaps a little too fluffy in places but with a wealth of singers courtesy of the talented Mr Conte on these sessions recorded in the studio in the Italian city of Bari from 2006-11, the vocals and overdubs added just in the winter. SG