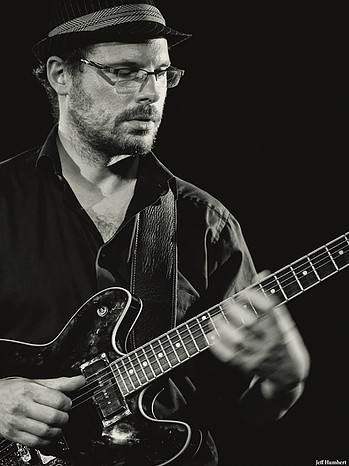 With the Open Source festival reaching a climax outdoors in Gillett Square as darkness fell, the usual Sunday night jam got underway after nine.

But ‘usual’ is relative and as ever the line-up of Riepler’s band isn’t known until the night and neither is the set list. The Austrian guitarist whose album Wild Life is one of the best modern mainstream albums I’ve heard this year had come from a gig earlier in the day at the Elderfield pub in Clapton and had brought saxist Rachael Cohen with him to join the jam’s regular bassist Dave Whitford and for one night only special guest US drummer Jason Brown who you may have heard play with Monty Alexander in the Jamaican-American's trio at Ronnie Scott’s last week. Brown was using a kit loaned to the session by drummer Tim Giles. As ever various musicians were in the audience (I didn’t stay for the second set when jammers were to get up) including pianist Bruno Heinen snapping a few pics of the band standing by the crowded bar like a fan.

The set began with ‘Up Against the Wall,’ Cohen’s old school tenor drawing on a Hank Mobley-like simmering romantic swing, Brown’s nicely jagged sense of rhythm complementing the masterly fretwork of Riepler whose sound sits snugly alongside the dexterity and ideas of Kurt Rosenwinkel. The standard ‘Gone With The Wind,’ when I hear this I think of Bill Evans, allowed Cohen to demonstrate her fine, expressive qualities on a ballad and that subtle side was reinforced later on the beautiful Strayhorn/Ellington standard ‘Isfahan’ the easy highlight of a set that also included versions of Charlie Parker’s ‘Dewey Square’ on which Brown showed his easy bop dexterity (his bebop bombs occasionally dropped during the set were Klook-perfect) and the cheesy ‘Come Rain or Come Shine’ was almost an after thought the band could play in their sleep.

Riepler has been touring with the Electric Biddle a good deal in France with Julien Lourau and is fast gaining an international reputation and understandably so given his natural flair and the sheer jazz empathy he has at his fingertips and so happily for any audience he is playing to shares. SG