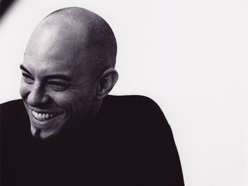 After a performance by his other band Ronin Rhythm Clan the previous evening as part of this Kings Place Minimalism Unwrapped residency and a Radio 3 live appearance earlier in the afternoon on the South Bank Swiss pianist Nik Bärtsch, here with long time associate Kaspar Rast on drums, Nicolas Stocker on percussion and the subterranean tones of bass clarinet and the rarely witnessed contra bass clarinet played by the curiously monikered Sha, went “extended” with the addition of a five-piece string section.

After a hugely long first foray, more like a minimalist symphony than a straightforward piece, the strings came clambering on to the stage and the concert clicked effortlessly into another gear, the slices of melody an annexe to the gigantic rituals and raw materials of the core group sound.

With a stage hardly lit, the near darkness enhanced the intense hushed atmosphere the fine acoustics in Hall One of Kings Place provide (even the modest squeak of one of the cellists’ music stands sounded like a roar). Bärtsch, clad in his signature stylish high necked black top and billowing trousers looking more like a ninja monk than a musician, presided over an intense collision of detailed sound, Mobile gnawing away at phrases until they bled raw rhythm, eking out some sort of momentous Steve Reichian effect often achieved, Bärtsch’s strangulated cries of ‘Ho!’ signalling a change in the direction of the music every so often.

Very much a group sound there’s very little extended soloing from any of the players although when the strings entered the picture the strictness of the rhythms relaxed a little faced with scraps of melody. Yet the cellos particularly became part of the extended rhythm section, an inevitability perhaps. Not always an easy listen Mobile Extended create their own rigid atmosphere and manage to reimagine rhythm as a function that somehow aids mindfulness, blanking out the cruel world beyond.