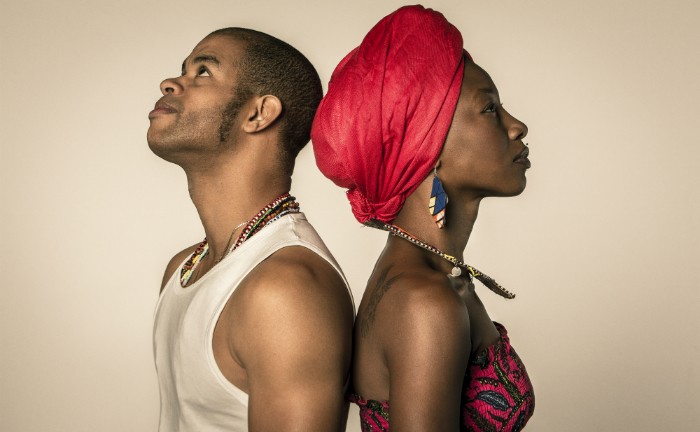 The first half of the concert featured French-Israeli singer/songwriter Yael Naim. Sometimes singing and playing the guitar, sometimes switching to piano as she sang accompanied by a bass player and by the ‘New Soul’ singer’s multi-tasking partner David Donatien who, remarkably, at various points played bass guitar, drums, and piano. Singing in English on this occasion Naim’s style spans intimate confessional song with a personal touch, paying tribute to her grandmother on ‘Older’ the title track of her latest album earlier rocking out on the Cathy Dennis song ‘Toxic’ Britney Spears made famous and which Naim recorded on her eponymous 2007 album. Best of all though was her own song ‘Coward’ which on her new record features jazz pianist Brad Mehldau. The lyrics are excellent and there was an immediacy here that some of the other material lacked particularly when Naim explored her inner operatic diva a little too much.

Then it was the turn of the night’s main attraction Malian world music star singer-guitarist Fatoumata Diawara and Cuban jazz pianist Roberto Fonseca (both pictured top) who recently released a new live album At Home recorded in France at the Marciac jazz festival last year. They went down an absolute storm with the audience. The band matches Cuban and Malian players so joining Fonseca who played both the grand piano and Nord keyboards and Diawara who played electric guitar on some songs and also added extra percussion were drummer Ramses Rodriguez, Yandy Martinez mainly on bass guitar switching to double bass on some numbers, electric guitarist Sekou Bah and the kamalan n’goni player Drissa Sidibé. The band has a swaying infectious feel to it driven hard by Fonseca who hammers the keys hard, rocking his body head bobbing up and down at his most exuberant while Diawara’s amazing voice cuts the air like a dagger. Her startling back-of-the-throat yodelly quickfire rattle punctuating the night air from time to time added an unearthly signature touch sending the crowd wild (you could hear people imitating the unique sound as they left the concert hall later on). Highlights for me were ‘Sowa’, ‘Clandestin’ and ‘Mandela,’ on the latter song, a tribute to Nelson Mandela, Diawara threw off her head scarf, the beads of her hair flying all over her face as she head bobbed joyously. ‘Bibisa’, which featured her guest vocals on Fonseca’s 2012 album Yo, was the best of the over long audience participation numbers that dominated the last half hour of an otherwise uplifting and highly entertaining performance.