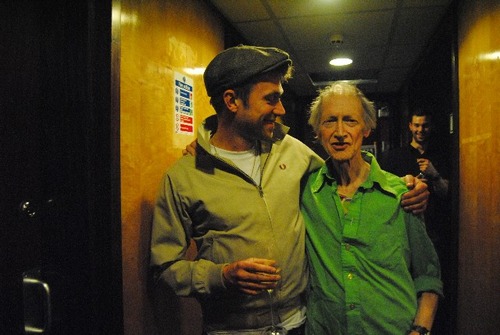 A third Poetry Superjam follows the very next night with poet Roger McGough, actor/director/playwright Steven Berkoff (Greek), Soho legend Molly Parkin, and avant pianist Alexander Hawkins, who is about to release a new trio album, among the guests.

Horovitz has been described by Margaret Drabble as “an original poet, with an original voice”, “a Popular, Experimental, New Jerusalem, Jazz Generation, Sensitive Bard” by Allen Ginsberg, and as “a dreamer, a maverick … transmedial crusader” by one Martin Amis.

Damon Albarn has been quoted as saying about Horovitz: “The unique thing about his poetry is the way that it connects the electric to the mystic.” Horovitz’s ‘Ballade Of The Nocturnal Commune / Extra Time Meltdown’ featuring Albarn, Graham Coxon and Paul Weller was released two years ago, the Blur pair and the Modfather also appearing with the distinguished anti-war poet on Bankbusted Nuclear Detergent Blues, the title track of which was commissioned by Paul Weller and the text of which appeared within the artwork of Weller’s album Sonik Kicks. ‘Hitchhiking Dead’ featured the Live New Departures Jazz Poetry Septet in a March 1962 recording, with Horovitz and poet/songwriter Pete Brown playing the student union of Southampton university along with Stan Tracey, Jeff Clyne, Laurie Morgan, John Mumford and Bobby Wellins.

Michael Horovitz, above right, pictured with Damon Albarn. Tickets here, link to the first night venue info. More details for the subsequent gigs may be found on the venue’s website