Dominic Lash releases his debut as a leader for Babel 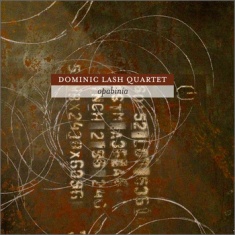 Released as a download album improv bassist Dominic Lash, best known for his work with Convergence Quartet, has made his Babel label debut as a leader with Opabinia, a 10-track quartet album just released, which sees Lash joined by pianist Alexander Hawkins (also Convergence, and Decoy), London-based Spanish drummer Javier Carmona, and Carmona's fellow countryman, the Madrid-born reeds player Ricardo Tejero who is also based in the UK. While download-only so far Babel tends to follow by releasing new work on CD some months on from the download digital album version. Tracks are ‘Isthmus’, ‘Waiting for Javier /Luzern’, ‘Hallucigenia’, ‘Lullaby of the Limpet (For Ella)', ‘Azalpho’, ‘Halt the Busterman’, ‘Wiwaxia’, ‘Double File’, ‘Anomalocaris’, and ‘Piano Part Two /Catachretic’. Lash was born in Cambridge in January 1980, graduated with a first class degree in English Literature from Oxford in 2002, and later was awarded a PhD from Brunel University, having studied the work of Derek Bailey, Helmut Lachenmann and JH Prynne. While Opabinia is Lash's debut for the cutting edge London label, which this year has released a string of agenda-setting free improv albums including Human's Being Human and Musson/Sanders/Noble's Tatterdemalion, he appeared on last year’s Gannets Babel release,Transmissions of Not.